The Bikes vs Cars App - Create your own climate effect

In Copenhagen 40% of the inhabitants commute by bike every day. Apply that number to cities like Los Angeles, Paris or São Paulo. What kind of city would you get, and how would it change the lives of the citizens? Along with the release of Bikes vs Cars we launched a smartphone app which can be a part of that change. 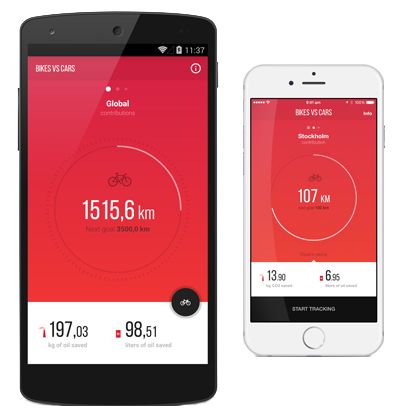 The app stores the user’s cycling trips and converts the distance into CO2 emissions saved. It provides both an individual and a collective experience. While the user can track and record their own bike trips, their data is also shared so that a total number of kilometers traveled and CO2/oil saved per city, region and country is displayed, as well as a global total. You can find the collected data here, through the Bike Data Project.

It's a political app. We hope the data will be used as a basis for a larger, political discussion around traffic, oil and climate change, and can at the same time function as feedback for city-planners and can lead to traffic-calming measures being installed where they are needed the most.

Financed by City of Malmö, region of Skåne and Cykelfrämjandet